Joma, as Official Footwear of the World Padel Tour circuit, has presented the new version of the official shoe of the WPT, the Slam model.
Slam has carved out an important niche in the padel shoe market niche thanks to the recognition of its quality-price ratio, the application of the most cutting-edge technologies in sports footwear and the prescription of professional players such as Juani Mieres, Javi Ruiz, Uri Botello, Teresa Navarro, Zazu Osoro and Javi Rico among others.
It is a specific shoe for this sport that is characterized by its cushioning, stability and high resistance to wear.
Its excellent cushioning is given by the use of the REACTIVEBALL system in the midsole. It is a material that expands easily, which gives it an enormous capacity to absorb the impact of the tread and, at the same time, quickly recovers its shape, boosting the output. In addition, the midsole is made up of another higher-density phylon base that provides stability.
The cut is very breathable due to its fabrication with mesh. This quality is highly appreciated in sports that are practiced on highly abrasive tracks. To protect this area of ​​the foot, the INJECTION PRINT system is applied, an injected rubber that comfortably supports the foot. In the inner area of ​​the foot, where there is greater wear due to lateral movements during the game, a larger piece of rubber is included that protects the foot.
EXO COUNTER is the stability system created by a more rigid external buttress that supports the heel, adapting the shoe to the shape of the foot. In this way, the tread will be stable in the lateral drag movements and firm in the heel entry.
Stability is reinforced by the use of the STABILIS system, an injection piece that goes from the bridge to the metatarsal and stabilizes the transition of the tread. Thanks to this piece, the shoe maintains its shape throughout the game, does not flex, and prevents incorrect twisting.
The sole is manufactured following the DURABILITY system composed of high-density rubber that resists wear on the slopes. Its deep herringbone pattern ensures grip on the playing surface. This more resistant material also protects the toe box. 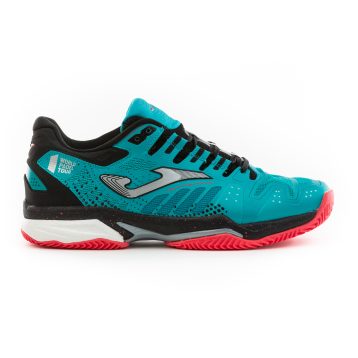